Malcolm Turnbull and Tony Abbott have officially agreed to an $11 Billion deal to to buy back Telstra’s copper network.

NBN Co has renegotiated its original agreement which now includes the acquisitions of the hybrid fibre coaxial (HFC) and copper networks from Telstra & Optus. 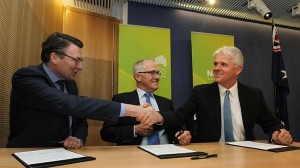 The previous plan, under a Labor government, was to pay Telstra $11 Billion to decommission its copper networks to pave the way for a Fibre To The Premises network. The Coalition government’s revised agreement has NBN Co taking ownership of Telstra’s copper network to deliver NBN broadband to Australian’s.

NBN Co’s CEO Bill Morrow has said the new plan to keep old networks will allow the company to “shave years off the NBN rollout schedule.”

Morrow praised the new agreement adding that “In the last six years, we have connected 300,000 users. In the next six years, we want to scale up to 8 million users.” The less invasive rollout plan to use existing copper & HFC means “The majority of homes across the country will no longer need to have their gardens dug up, their driveways broken apart or equipment mounted on their homes,” the NBN Co CEO said.

Although the $11 Billion deal to take ownership of the copper and HFC networks is the same in value as the previous agreements with the telcos, taxpayers are still going to have to pay for the operation and maintenance of the ageing networks.

Shadow Communications Minister, Jason Clare, in a press release has said: “Don’t believe the idea that this is free. This is going to cost taxpayers billions and billions of dollars to maintain and upgrade this old copper network. This is a copper nail in the coffin of the NBN. This is not the NBN that most Australians want.”

The Labor spokesman slammed the deal saying “The reality is that the Australian taxpayer has just assumed all the risk associated with these two assets – the copper network and the HFC network,” adding “You get a slower, second-rate network.”